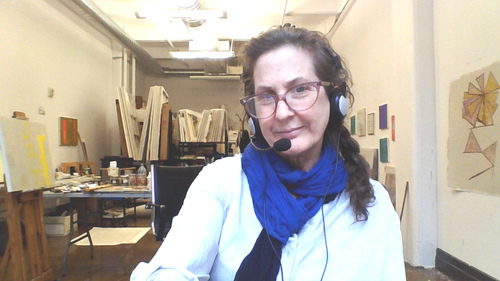 On May 13, to help kick off another online edition of Dumbo Open Studios, Sharon Butler and Two Coats of Paint have organized a marathon art conversation on Clubhouse featuring a lively crew of DUMBO regulars. Artists and arts organizations will join us throughout the day to talk about art, exhibitions, issues and ideas. The Two Coats of Paint Club will open rooms from 9:30am to 7pm (and at miscellaneous times throughout the ten-day event). Guest hosts include Matthew Deleget from Minus Space, Becky Sellinger from Smack Mellon, Beth Dary and Jeff Wallace from the Main Window Dumbo project, Elizabeth Hazan from Platform Project Space, Alexi Worth, Laura Karetzky, Teri Hackett, Samantha Taylor, Lauren Skelly Baily, will host, and many other artists will join them throughout the day. Read more.
Sharon Butler: Morning in America at Theodore:Art
1/9/2021 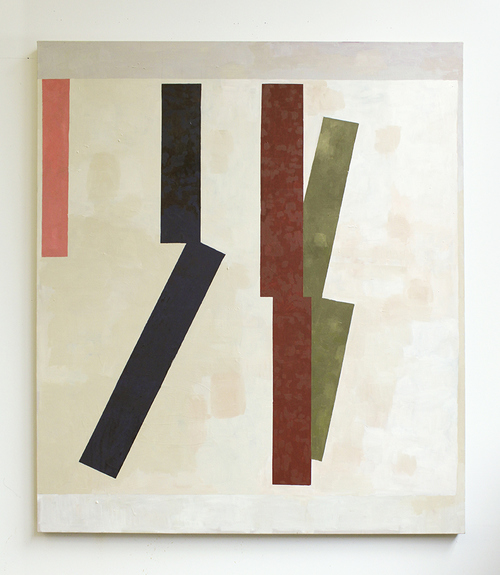 Theodore:Art is pleased to present an exhibition of new paintings by Sharon Butler.For the past few years, Butler has produced daily drawings on her phone. The Good Morning Drawings, digitalsketches uploaded to Instagram, reflect the peripatetic experience of a contemporary painter with a complexlife—teaching, traveling, parenting, working. The small geometric abstractions serve as foundational ideas on whichto build firm structures that investigate painting and its discontents more thoroughly in the context of a complex andchaotic world.

In March of this year, during the Covid lockdown in New York City, Butler had the chance to reflect on personal andsocio-political anxiety as refracted by the diaristic nature of the Good Morning Drawing series of the recent past.The time in the studio was quieter, oriented towards a kind of distillation of paramount issues and aspects of theartist’s life and world view -- a kind of slow breathing exercise of the mind. This show represents an exhale of relief.We are still here, Butler still finds the lifeblood of painting closely connected to the roller coaster of the experienceof daily life.

A painter and arts writer, Sharon Butler is widely known as the founder of Two Coats of Paint, a project whichincludes an influential art blog, an artist residency, and other initiatives. She has shown work at Theodore:Art (2016,2018) and SEASON (Seattle). Thanks to the generosity of the Two Trees Cultural Space Subsidy Program, Butlermaintains a studio in Brooklyn, under the Manhattan Bridge. She has received grants and residencies from CreativeCapital/The Warhol Foundation’s Art Writers Program, the Pollock-Krasner Foundation,Yaddo, ConnecticutCommission for the Arts, and Counterproof Press. She currently teaches at the New York Academy of Art and inthe MFA program at the University of Connecticut.

Her exhibitions at Theodore in 2016 and 2018 have receivedcritical attention from Time Out NY, Hyperallergic, Artcritical, and New York Magazine.

For information and images, please contact Stephanie Theodore at 212 966 4324 or ​theodoreart@gmail.com​ 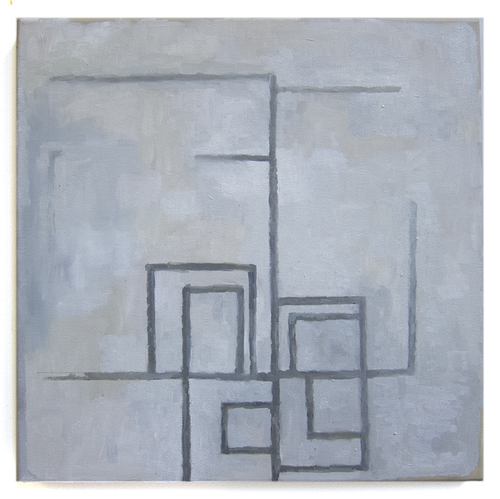 “In a world that has REALLY been turned on its head, truth is a moment of falsehood.”― Guy Debord

Theodore:Art is pleased to present Deep States​,​ an exhibition informed by and circling ideas of hidden powers,control, paranoia, and distrust of the powers that be.Although the term “Deep State” has been applied throughout the 20th and 21st Century to various regimes inmultiple countries, as a basis of comprehension we will start from the idea that if the Deep State is the unelected government, then by definition it is an undemocratic government.

The artists herein suggest projections of thatunelected power that affects our lives. Their responses are mysterious, documentary, hallucinatory, anxious,dreading, pissy, contemplative, and ultimately subjective. The impossibility of visually defining the identity andlimits of a mythical entity makes the act of attempting to do so both heroic and sisyphean. The Deep States eludethe grasp of the mind, the long arm of the law, and the influence of societal norms. 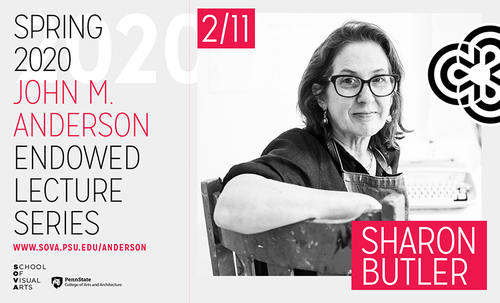 Free and open to the public.


The Penn State School of Visual Arts John M. Anderson Endowed Lecture Series was established in 2001 through the generous support of John M. Anderson, Penn State Professor Emeritus.  The result of Dr. Anderson’s love of the philosophy of art and painting, his endowment contributes to the creative and intellectual life of the campus.  The series sponsors leading artists and scholars who lecture, give master classes and workshops, and critique student work throughout the academic year.  Dr. Anderson, an Evan Pugh Research Professor of Philosophy, was a long-time faculty member and three-time department head in the Department of Philosophy and the first director of Penn State’s Institute for the Arts and Humanities.  Lectures are free and open to the public.
Surface Tension: Panel Discussion at Monica King Contemporary Art in Tribeca
1/19/2020 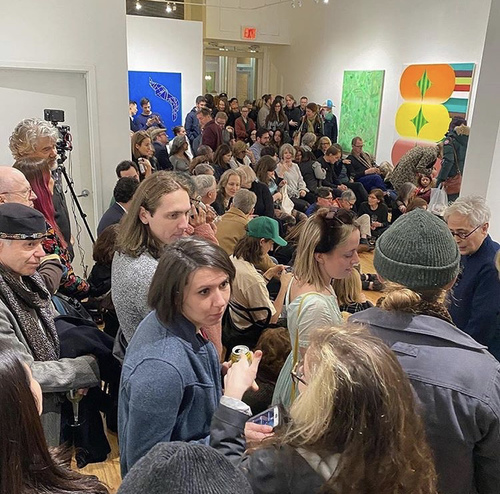 Artist and curator Jason Stopa invited Katherine Bradford and Craig Stockwell, along with Two Coats of Paint founder Sharon Butler and Hyperallergic editor Thomas Micchelli, for an evening of conversation on the occasion of “New Skin” Stopa’s latest curatorial project, on view at the gallery through January 25. The exhibition, which includes works by Michael Berryhill, Shirley Kaneda, and Clare Grill, among others, places emphasis on works that toy with idea of representation, conjuring ideas of objects, but leaving space for imagination.

An Editors Pick in Artnet News

Image at top: A snap shot during the discussion, courtesy of Gweneth Leech. 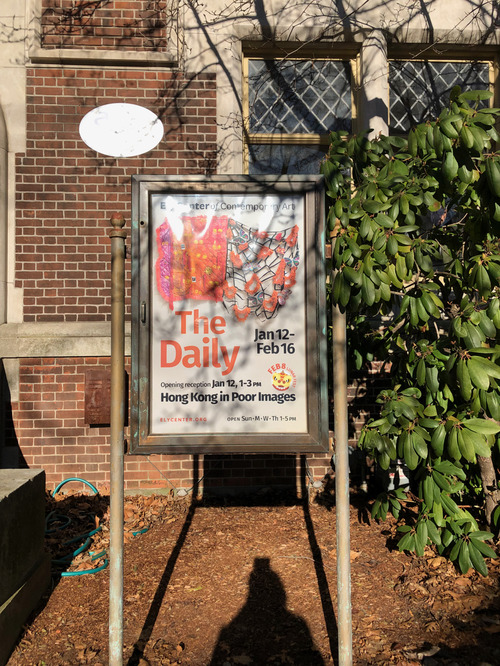 I was recently invited to select work from an Open Call at the Ely Center for Contemporary Art in New Haven. Looking at more than 300 worthy submissions (and reading all the artist statements) I was drawn to work that’s rooted in materiality, ritual, and the structure of daily life. I called the show “The Daily” after Michael Barbaro’s NY Times morning podcast, which is what I often listen to as I make and post my own daily drawings on Instagram.

See images of the show and read the curator's statement here. 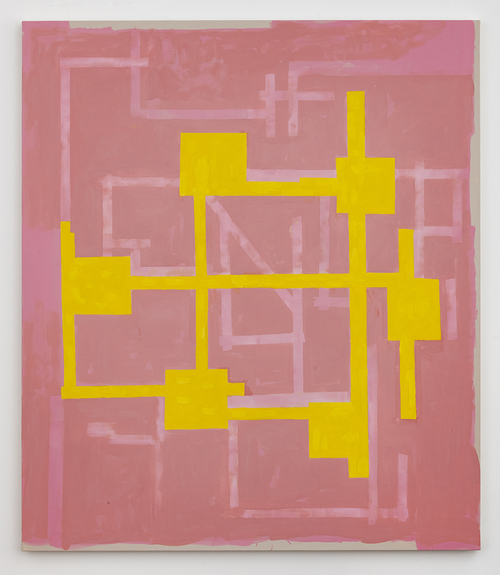 Theodore:Art is pleased to present Houses in Motion, an exhibition of contemporary geometric abstract painting. The works in the show share a structural visual soundness while also manifesting a certain slippage of that very same gravity-bound construction.  They offer the aesthetic equivalent of the agitation felt during a tectonic tremor -- can we trust the construction and materials of the building? can we trust architecture? can we trust technology? can we trust reality? Undercurrents of skepticism, idiosyncrasy, and curiosity make these paintings resonate, leaving vibrant impressions in memory.

A painter and arts writer, Sharon Butler is widely known as the founder of Two Coats of Paint, a project which includes an influential art blog, an artist residency and other initiatives. She has shown work at Theodore:Art (2016, 2018) and SEASON (Seattle). Thanks to the generosity of the Two Trees Cultural Space Subsidy Program, Butler maintains a studio in Brooklyn, under the Manhattan Bridge. She has received grants and residencies from Creative Capital/The Warhol Foundation’s Art Writers Program, the Pollock-Krasner Foundation, Yaddo, and Counterproof Press. She currently teaches at Cornell University and the New York Academy of Art.

Laurie Fendrich is an abstract painter who lives and works in New York and Lakeville, CT. She is Professor Emerita of Fine Arts at Hofstra University, and is a 2016 recipient of a John Simon Guggenheim Foundation Fellowship in Fine Arts. She has had numerous solo exhibitons in New York and nationally. Her paintings and drawings were the subject of a twenty-year retrospective, accompanied by a catalog with an essay by de Kooning biographer Mark Stevens, in 2010 at Scripps College in Claremont, CA. Her work has been reviewed in such publications as The New York Times, Artforum, Artnews, Art in America, ARTS Magazine, and The Partisan Review. In addition, she is the author of several essays, published in The Chronicle of Higher Education, on the role of art and artists in society.

Richard Kalina is a New York-based painter, whose 26th solo exhibition, Future Perfect, opened last February at Lennon, Weinberg, Inc. His work has been shown nationally and internationally since 1969, and he is represented in numerous public collections. His painting, The Highlands, has just been acquired by Mumok (Museum moderner Kunst Stiftung Ludwig) in Vienna, Austria. In addition to painting, Richard Kalina regularly writes about art, primarily for Art in America, where he is a contributing editor. Richard Kalina is a member of the National Academy of Design, where he sits on the Board of Governors. He teaches studio art and art history at Fordham University and has taught at Bennington College and Yale University.

Gary Petersen (b. Staten Island, NY) received a B.S. degree from The Pennsylvania State University and an M.F.A. from The School of Visual Arts. He has exhibited widely in New York and throughout the United States. Awards have included The MacDowell Colony Fellowship, The American Academy of Arts and Letters Purchase Award, New Jersey State Council on the Arts Painting Fellowship, The Sharpe-Walentas Space Program, and the Edward F. Albee Fellowship. His work has been reviewed in HyperAllergic, ArtNews, Art in America, The New York Times as well as many others. His work is in several private and public collections including The Dallas Museum of Art and the US State Department. He is represented, in New York, by McKenzie Fine Art.

Born in 1989, in El Paso, Texas, Eric Manuel Santoscoy-Mckillip earned a BFA from the University of Texas at Austin, in 2011, a Masters in Interdisciplinary Studies from the University of Texas at El Paso in 2015, and a MFA in Fine Art from the New York University in 2017. Moving between painting and sculpture, Santoscoy-Mckillip’s work is an examination of place and identity through the use of color, symbols, space, and textures by reclaiming what has already been reclaimed. The transitions between these elements shift, overlap and blur to reflect the in-between space of the borderland and continually changing and complex identities and histories of himself and those of the geographic region.